We are all familiar with ancient monuments like: The Egyptian Sphinx and the Pyramids, the Parthenon in Athens, the Colosseum in Rome, Hagia Sophia in Istanbul, Turkey, the Cathedrals throughout Europe, the Taj Mahal, Stonehenge in England, the Great Wall in China, the Mayan Pyramids, and the Statues on Easter Island, just to mention a few that have survived. There are others as well, including the recently discovered Mayan treasures that are hidden by the regrowth of the rainforests in Central America and the monuments that were lost to the ravages of war, conflicts time, and nature. This accompanying complete list provides additional information and references

It is one thing and fully appropriate to honor the magnificent monuments that previous societies created.  However, there is another very important hidden attribute to understand and honor as well. It is almost always neglected. It is the accomplishments of the cultures that gave rise to the structures. Especially impressive is the fact that the cultures were able to create the beautiful works of art under the limiting conditions they faced. 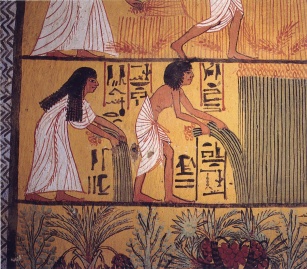 be honored in its own right and as a work of art. But so do the achievements of their creators who came up with the ideas and brought the monuments to fruition. The cultures that gave rise to them also deserve accolades.

Looking at the monuments from a different perspective adds to their significance. It also recognizes and honors the role of the culture that created them. To understand the contribution that the culture made, think of it this way—the society could not have produced the monuments if it were unable to produce an economic “surplus”. That is, unless the society was able to provide more than enough goods and services to satisfy the basic needs of the entire population. Not only does that include those who worked on or contributed to making the monument possible; it also includes the rest of the population—those who were not directly involved in building the monument. The prerequisite to creating each of the monuments is that the society must have sufficient time, energy, resources, and funds (TERF) before it can produce a monument. Moreover, if any community objective has a higher priority than creating the monument — like engaging in wars or conflicts, then creating the monument takes second place and becomes less likely.

Let’s take a step backward to better understand who and what else should be honored for such accomplishments. Before any of the structures can come into existence there are significant prerequisites. One way to think about it is to remember what is required to create any work of art, especially a large one. The steps include:

It is important to remember that the cultures that created the ancient monuments were separated in time and in space, with little or no knowledge of or communication with the others. The Sphinx was built in about 2500 BCE, the Taj Mahal in the 1630s AD. Each culture had to rely on the technology, skills, tools, resources and materials that existed at the time and that were available locally. The conditions they faced were markedly different than those we face today. For example, in most societies there were no power tools, only hand tools. Some did not even have metal tools. Many had very limited resources. Some were without beasts of burden. In spite of those limitations, each culture created large, beautiful, complex monuments of international renown, structures that have survived over centuries.

Each of the ancient monuments is a significant large-scale ‘work of art’. Its existence is an accomplishment that deserves to be acknowledged and honored. Like any other work of art there is a long way from the concept to reality. Bringing the monument to life requires going through the process of production — step-by-step. That process is especially difficult and unpredictable if the concept is new and novel. It is made even more difficult when the monument is large and requires considerable amount of time, energy, resources, and funds (TERF) just to bring the work of art to fruition. The larger the Monument, the more difficult it is to bring all the component parts together in one location, especially when the Monument is very complex. Thinking about the Monuments in that context, one realizes what a significant contribution they are, especially in light of the technology, tools, equipment and resources that were available at the time. Moreover, some of the Monuments took years, decades, or even centuries to complete. That makes its successful completion more difficult to achieve and of even greater significance.

There is another significant cultural achievement that honoring the Monuments alone fails to recognize. Think about what it took to conceive of, muster the component materials, and build each of the structures. Each structure had to successfully go through that process to bring it to fruition. Moreover, none of the structures could have existed

without the necessary “manpower” (I prefer to call it human or person power.) The fact that the society was able to free up the person power required to create the structure is the hidden, behind-the-scenes major accomplishment of the culture. Look at it this way, in order to provide for the workers on a daily basis, the society had to produce enough goods and services to take care of everyone. That not only includes those who worked on the monument, it also involves those who produced all of the required goods and services as well. Furthermore, the decision to build the structure is a collective decision, requiring communal action.

In economic terms, the first priority of every society is to produce enough goods and services to take care of everyone currently in the society. In order to create a monument the society had to produce that amount and more — a “surplus”. The TERF required to create the monument comes out of the surplus. If the output falls short of what was required to sustain the culture, not only would it be impossible to create the monument, there was no guarantee that the society would exist beyond the current generation. In short, first and foremost everyone had to be provided for.

The fact that the communities that preceded ours were able to create large enough surpluses to build the ancient monuments, especially under the conditions they faced, is a significant achievement in its own right. It is an accomplishment that deserves to be recognized and honored along with the monuments themselves.

The time, energy, resources and funds (TERF) that any society has is limited. We all recognize the outstanding ancient monuments that each of those cultures created as major accomplishments. The fact that they were able to accomplish that given the limited TERF that they had available and under the technological and economic conditions they faced at the time, makes that accomplishment even more remarkable. Think about what else they could have achieved had they chosen to use the same time, energy, resources and funds for some other purpose.

Each of the ancient monuments reinforces Dr. Clemens Somer’s, my Art History professor at UNC Chapel Hill, mantra– “Art is a product of the culture”. The fact that the society was able to create a ‘surplus’ in light of their isolation and under the technological and economic conditions they faced, is a remarkable feat in and of itself.

The bottom line is that the monument is proof of each community’s ability to take care of itself and create a surplus under the restrictive conditions it faced. How about that as an achievement!