Let’s talk about the concept of surplus. As adults each of us has the primary responsibility of taking care of ourselves, first and foremost. That involves providing the goods and services necessary to survive on a day-to-day, week-to-week, month-to-month basis — the air, water, food, sleep, clothing, shelter, etc. Over and above that it is necessary to use our limited time, energy, resources and funds (TERF) to fulfill any obli

Here is how an individual and the aggregation of individuals — what economists call the household — can decide to use its disposable TERF (the amount left over after satisfying the primary objectives). Some of it can be used in the following ways: to increase the consumption of goods and services; be put aside for future consumption — into saving; used to pay off previous loans; or assist other individuals and households that do not have sufficient disposable income to survive long-term. Some of the funds can be set aside to cover unexpected expenses. Or can be devoted to the attempt to develop new products or processes of production — innovations (some of which may be successful) or used to create works of art, or anything else the individual or household may decide to do with its remaining TERF.

Any income that we have left over after fulfilling the primary objectives is our disposable discretionary income — the surplus. The left over funds can be used for anything else we choose to do with them. How we choose to use the surplus is up to each of us. For those at the lower-end of the income distribution—almost all, all and sometimes, even more than all of their disposable income is used up just to survive. The more of our income that we are able to withhold from current consumption, the greater the surplus.

END_OF_DOCUMENT_TOKEN_TO_BE_REPLACED

Let me begin by telling you a story about Bill Daigle. Bill was raised on a farm in Minnesota. He was born in 1954, one of 14 siblings. Bill got his training in mechanical drawing. Initially that is how he made his living. He shifted jobs to become a salesman for a nonprofit life insurance company, working his way up the line into management. The company moved Bill from Minnesota to Arkansas and eventually to North Carolina, where he “retired” in 1989. Bill built himself a home with a studio where he lives with his second wife, Paula.

Every day, at 65, Bill does just what he always wanted to do, namely, work in wood. Bill calls himself “The Chairman”. Have a look at some pictures of Bill’s work.

On Saturdays you will find my friend, Bill at the Carrboro Farmers Market, where he displays and sells his work and watches the young children playing on a footstool or with a wooden plane or truck, sometimes under a parent‘s watchful eye. That’s where we met. 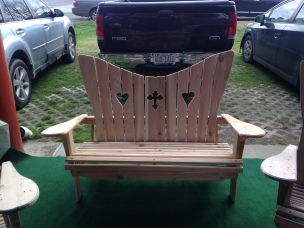 Bill is doing what he loves doing and uses his unique skills and expertise to produce products others like. If he elects to sell the work, he gets some bucks on the side. That’s not too bad. He can use the extra money to help take care of himself and his family, and to do the additional things they like doing.

Can you imagine yourself as a “retiree” and being in Bill’s position? That is, spending your days doing what you love doing and selling the work — the products and/or the services — to others who are willing to pay your asking price. As an aside, they are willing to give up that amount of money just to get your work.

END_OF_DOCUMENT_TOKEN_TO_BE_REPLACED

For a while now I have been working on this series of blog posts entitled “Surplus”. One’s primary responsibility is to take care of oneself and fulfill any obligations and commitments that we have taken on. The remaining discretionary time, energy, resources and funds is our disposable TERF  — our Surplus. Only you can decide what you want to do with it.

The current coronavirus — COVID-19 — provides an important example of why it is necessary to take our surplus into consideration when making our decisions. The virus brings on a new set of circumstances, along with the accompanying uncertainties. Those new conditions affect the appropriate decisions. For example, if your income declines and you do not have additional surplus set aside, adjusting to the virus is difficult. It is my hope that this blog series, “Surplus” will provide you with a better understanding of the nature and consequences of the concept, so that the choices you make will be better for you.