Marriage is a statement about a bonding and a commitment between two people. Outsiders and the State can and should honor that commitment, especially since it does not adversely affect anyone else. 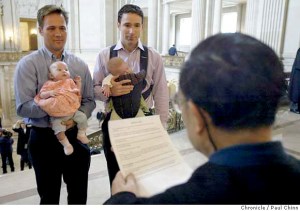 The nominal rationale, by those that oppose same-sex marriage, is that heterosexual couples are best suited for raising children.

Let’s start by saying that is an assertion. Where is the proof? Even if it were true, having and raising children is not the only reason for marriage. As I said earlier, it is about bonding and commitment between consenting adults. Turn it around. Would you want anyone to tell you who you should be with, what is right for you, and what you should do? Now let’s look at “the best for the children” argument. Having children is not the reason most couples get married. Certainly not all want or have them. Some who do, sometimes can’t. Moreover, the bonding provided by marriage lasts long after the children have left the nest. That is simply not a basis for providing the rights and privileges of bonding only to heterosexual couples.

Taking it a step further, just in case you haven’t noticed, many couples break up. When they do, the children are raised by a single parent, the separated parents, or someone else. At other times, a single adult or teenager gets pregnant. If she does not want the child, or can’t afford to take care of herself much less the child, and is not permitted to have an abortion, then her options are limited. At times the child is raised by a parent that didn’t want it, frequently under impoverished circumstances. That is especially difficult if the parent does not have sufficient education and experience to get a well-paying job. Moreover, she must spend much of her time taking care of the unwanted child. Sometimes the mother and/or the child require governmental services, or at other times the child may become a ward of the state. Many of those who are opposed to same-sex marriages are the same individuals who want to eliminate government services and reduce the size of government. Do you really believe the child and society are better off in any of those circumstances, than if the child was raised by a couple in a loving homosexual marriage?

The bottom line is that heterosexual marriages are “the best place to raise children” is not a rational basis for not permitting and honoring homosexual relationships and providing those who wish to engage in them the same rights and privileges as all citizens. Though it may not be my sexual preference or orientation, I can still see no reason for denying those for whom it is their rights and privileges.